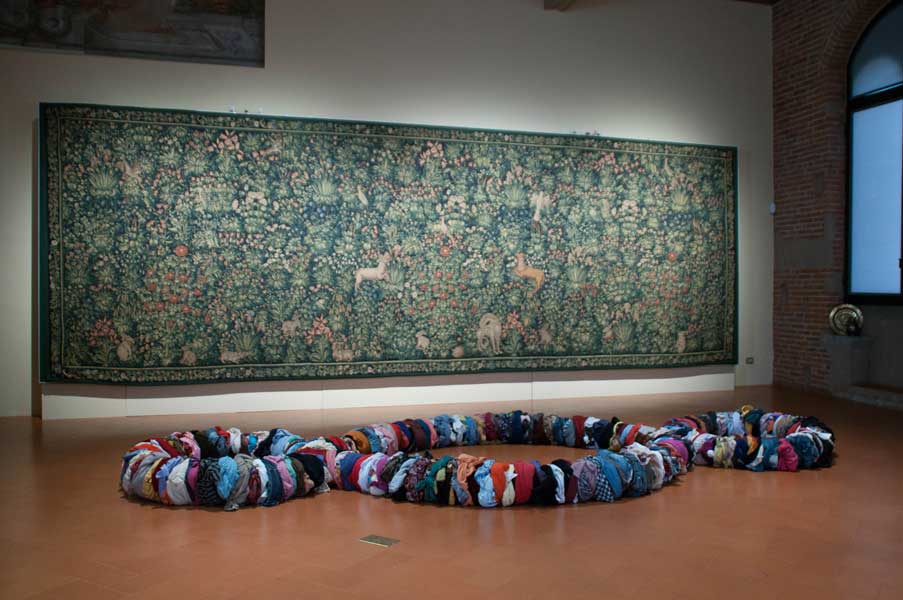 After 26 years, Michelangelo Pistoletto returns to Pistoia for a tribute dedicated to him. Come and listen to him on September 30th at 12.00 in the Synodal Hall of the Palazzo dei Vescovi. One of today’s greatest artists, Pistoletto designed the symbol of the Third Paradise.

“With the term Third Paradise, we refer to a possible
path for humanity: a new world.
In the symbol of the Third Paradise, a line crosses itself
twice,forming three consecutive circles. The two outer
circles represent all opposites. The middle circle is the
place where we are responsible for connecting them, so
that they can nourish a new society’s womb.”
(Ominiteism and Demopraxia, 2017)

We intend to create the Third Paradise in Pistoia by making an aluminum frame that incorporates the symbol’s shape that is swathed in used clothes and fabrics – a part of us and our city – for a collective work that belongs to us and to humanity. The women from the Manusa Cooperative will be responsible for covering it through a recycling of Pistoia’s clothes and fabrics. This Third Paradise will be seen during Michelangelo Pistoletto’s speech at Palazzo dei Vescovi and will later be displayed at Galleria Vannucci.

Scroll back to top